Before we get to The Wrath of Nero: A Deadbolt Mystery Review here is some information about the monthly mystery boxes.

Deadbolt Mystery Society is a monthly subscription with a new mystery each month. Each box has puzzles to solve, clues to find and evidence to follow. Each month is a standalone mystery and they all seem to take place in Valley Falls. I have not done them all to be sure though. The Will Street Detective Agency investigates the mysteries and you work for them.

The Wrath of Nero: A Deadbolt Mystery Review 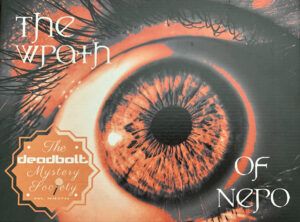 The Wrath of Nero (June 2018) – It’s been over a year since the psychopath known as Nero last threatened the citizens of Thornmire County. A villain with his own moral code and twisted sense of justice, Nero doled out punishment on those he deemed guilty, mimicking his namesake, the Roman Emperor Nero, who was known for his cruel and unusual methods of torturing those who crossed him. No one had seen or heard from him until earlier today when you received a curious box from Nero, threatening the city of Hampstead with the release of a highly communicable airborne toxin that will likely kill thousands of innocent people if not contained. Nero, however, enjoys the thrill of the chase and the challenge of a worthy opponent. He has provided a series of puzzles that will allow you to pinpoint the location of the toxin as well as the means to disable the bomb that will disseminate the chemical compound into the atmosphere. He has allowed you and the other members of the Will Street Detective Agency 72 hours before the population of Hampstead is wiped off of the map. Oh, and one more thing. Nero has given specific instructions not to contact the police, the CDC, Homeland Security, or any formal law enforcement agency, threatening to detonate the bomb early if his instructions aren’t followed. This means your wits and detective skills are the only thing that stands between the town of Hampstead and a bloody, brutal demise. Discover the secret behind Nero’s wrath and do whatever it takes to save the citizens of Hampstead. Difficulty Rating – 7/10 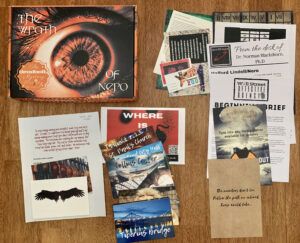 Another great mystery from the Deadbolt Mystery writers.

Subscribe to Deadbolt Mystery Society and get a new mystery every month.

I am not affiliated with Deadbolt Mystery Society, I just enjoy the mysteries. I subscribe and buy these myself.